After a few years out of the recording game, I recently borrowed a Saffire 6 USB interface to try out with my new PC. I wasn’t familiar with the unit and really wanted a new Steinberg UR44, but money is tight as ever and the Saffire was offered on loan for free. I installed the free DAW Reaper onto my PC, along with the USB drivers for the Saffire and away we went.

I booted up Reaper, selected the Saffire as the recording interface and plugged in a mic. I was getting audio into the unit instantly, so I looked around for some speakers to try. As I didn’t have an extension lead to reach the big speakers, I used a small homemade USB powered speaker, drawing its power off the PC. I played back what I had recorded and noticed that the sound was really noisy – digital artefacts, hiss and zipping noises which changed as I clicked the mouse or moved windows around. However, I assumed that this was caused by the cheap homemade speaker being really close to the computer and thought nothing of it.

I recorded some Cajon and acoustic guitar and wanted to play it back through my proper speakers so I dug around for some cables and connected it up. Immediately, I noticed that the digital noise issue was also coming through the big speakers. Not good. What was odder was that the noise came through the speakers even when the volume on the amplifier was turned right down. Stranger still!

A little looking online revealed a few people who had similar problems with the Saffire 6 USB and others, and it was suggested in a few places that it was some kind of a ground loop issue where different pieces of equipment that share a power supply have earths that are not exactly the same. To test this theory I plugged the USB powered speaker back into the interface, and this time powered the speaker from a portable USB power bank.

Hey presto – quiet as a mouse.

So, I know it’s not the interface as such, and it’s nothing to do with the preamps or output section – it’s definitely a ground loop issue. The unit itself was nicely quiet once the speaker issue was sorted out. However, I need to be able to monitor through proper speakers, so tonight I’m going to try and get them working noise-free.

I’m going to try powering the amplifier from the same power socket as the computer, as this can be a typical source of problems, in my experience of live sound. If all electrical equipment is powered off the same circuit, ground loops in theory are not an issue. However, I suspect that because the Saffire 6 is buss powered (from the USB connection) it may not have a proper earth, but rather a floating earth, which is not quite the same, and possible what’s causing the issue.

I’ll let you know how I get on.

Okay, so Itried running all of the equipment – PC, monitor and amplifier – off the same plug strip. it did not fix the problem, and a little bit more reading shows that it’s definitely the USB grounding issue that I read about previously. So how to fix it? Well, there seems to be a couple of avenues of attack. 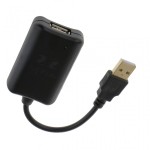 This small device goes inline in between your computer and the interface. It does its magic and makes sure that the ground loop issue is removed from the USB line. This prevents it from getting into the audio cable (on the ground side) and getting to the amplifier where it manifests itself as the noise I’m experiencing. There are several models available online, but on closer inspection they all seem to use the ADUM4160 chip, so must all do a similar job. They’re not cheap though – the lowest price unit on eBay is £29.99 and that’s for a bare circuit board with a bit of heatshrink on it for protection. The one pictured is by HiFiMeDIY and is £45, although it’s a bit better made. Even at £29.99 these are a significant investment in an audio interface that only cost £99 in the first place though!

Assuming we don’t use the USB isolator we’ve now got an audio cable going to our amplifier that has a lot of digital noise on the earth part of the signal. We need a way to get rid of that before it reaches the amplifier and comes out of the speakers. Reading online, the unit that gets mentioned an awful lot is the Behringer HD400, although a Google search for audio isolators will bring up other boxes by ART, Radial and many more. These boxes all work on a similar principle, using two pairs pf transformers to decouple the audio going in from the audio going out, and thus sorting the ground loop noise issue. People often ask “does this affect the sound quality2 and to a small degree the answer is yes. However, this only affects what you are heatring through your system and NOT what

I like beautiful things which is lucky for me because I find beauty in almost anything....